Like a young Jackson Pollock, Manfred Url of Austria performed before a mesmerized audience at the August 31st, 2007 opening of his "LampPaintings" and Matt Meyer's "Metal Works" at the Galesburg Civic Art Center. (...) On the floor a stretched canvas approx. 6 feet 3 inches [200cm] was lit from behind. Performed Celtic music and Sacred Drum sounds filled the air and seemed to guide url's gestures with the long-handled paint roller. In silent concentration [and] without a word, [Url] demonstated some varied techniques he used in the finished works surrounding him on the walls.

"Pan Art" is the term he uses in reference to his art. It comes from the Greek "Panta Rhei" which translates "everything flows". Before our eyes, as he works, an image does flow. The paint is in constant flux just as in the American Action Painting of Jackson Pollock in the 1950's.

In contrast to Pollock's pure paint build up on the surface, Url returns to the dried canvas and through collage, creates representatinal cityscapes. The small "Chicago Dreams" with its downtown bridges drawn open, is one of them. 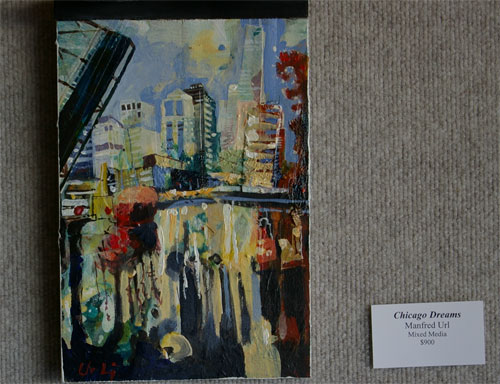 Another, "Coming Home", is a much larger work with actual potato sacks attached to the bottom of the painting as if trash were blowing in the wind, and corrugated cardboard (frequently used [by Url] for buildings) defining skycrapers. Many painting techniques: smudging, dragging, swirls, are seen in the motley threatening yellow and umber sky.